Cozy up and watch these short videos and just let the information soak in. In each, you’ll find nuggets of wisdom such as: “Action comes before motivation.” Which for me, I find to be the case more often than not. Enjoy!

This is a continuation of my last post on goal setting. I’d like to take this opportunity to delve further into Hunter Thompson’s idea of the decision between going with the flow by designing a life that accentuates your experiences and natural talents OR swimming against the current by re-inventing yourself in order to achieve a goal that may not reflect who you are now but instead reflects the person you’ll have to become in order to achieve that goal. (I hope this is making sense.) I can see the merits in both paths and it’s safe to say that I’ve sampled both.

Ever since grade school, I’ve focused heavily on cultivating my natural talents. I played guitar, was in various rock bands, took vocal lessons, wrote fantastic short stories and poetry and won awards for my artwork. Even before that though, I loved animals. I was born into this world with an affinity for and a kinship with animals. So in my senior year I was faced with a dilemma. Should I go to school for art, pursue a recording contract with my band or go to school for Veterinary Technology?

The veterinary work posed various exciting challenges. I was an honors student in remedial math, I wasn’t particularly scientific-minded, and blood & guts made me rather squeamish (a few months earlier I had fainted in front of my entire high school class when we took a tour of an embalming room at a local funeral home and when I toured SUNY Delhi I almost fainted when the guide began talking about analyzing blood samples). Basically, I was going to have to re-make my mind in order to succeed. Plus, it was the only career path that I deemed meaningful at the time. Thus, I enrolled at SUNY Delhi, I got over my squeamishness, and worked my butt off to be a Dean’s List scholar. I poured all my time and effort into swimming against the current, so to speak, at the expense of my creativity. My natural talents began to rust and after a while I was completely unable to write, play music or draw. I had sold my soul for a 3.9 GPA.

After college I began to realize my miscalculation. (Let me be very clear, I have no regrets about choosing that path. I would do it again in a heartbeat. It led me to my absolute best friends and for that I will always be indebted to SUNY Delhi.) It didn’t take long to realize that I had accomplished the only part of the goal that I found enticing: mastering those things that I completely sucked at such as math, playing with blood & guts, enjoying science, etc… When it came time to get a job, the only challenge there was for me was not accidentally killing something during my shift. And the meaning that I desired in my career was sadly lacking. Sure, I was helping some but not in the numbers I’d hoped. It all felt like a big, hollow letdown. And for many years I continued on this detrimental spiral of trying to find meaning in challenging myself to excel at the things I completely sucked at.

Flash forward to nearly twenty years later (I can’t believe it’s been that long!), I still can’t pick up my guitar, I write this here blog but not to the level that I once could, and I have only just started to draw again. But let me tell you, revisiting my creative roots by making all of the things I do and devoting my time and effort to it has helped me to find meaning and it honestly doesn’t feel like work. I am not battling against a constant current and I’m not trying to be good at things that I’m frankly just not good at. I wish I had realized this several college degrees ago because it could have saved me a lot of time, energy, stress and money.

Now that I’m starting to appreciate the benefits of swimming with the current instead of against it, I want to address some of my limiting beliefs that have made my swim more choppy. I know now that my creative block during and after college stemmed from the belief that one side of your brain is always less developed than the other–the whole right brain, left brain concept. To me this meant that if I devote my time to building up that analytical, scientific side of my brain than my creative side must be sacrificed. As you can tell, I no longer feel this way. You can balance both efficiently by partnering with those who are good at the things you aren’t and just accept the fact that you can’t be a rock star at everything.

Another example is with drawing. I’ve been trying to draw for years and have walked away from all projects feeling completely and utterly defeated. As soon as I’d put the pen to paper my own judgemental monkey mind and internal chatter would overwhelm me. Some of the chatter was about not being as good as someone else which is ridiculous when it comes to art because it’s a subjective experience and therein lies it’s beauty. Some of it is asking if “wasting” my time on something like art is actually contributing to any greater good? Some of it is about goals again and my self-imposed limitations, the biggest one being that I could never make a living this way so why bother? Then a few days ago something changed. I was hired by my friend to make some jewelry for her store. Proof right there that I can make money doing something artistic.

For years, I’ve loathed making jewelry because I’ve never felt like it’s an individual expression of who I am. I would cringe whenever parents looked at my jewelry and said to their kids that they could go home and make the same thing. It made me feel embarrassed and ashamed because I knew I could do better. For the longest time I’ve tried to phase it out but in all honesty, it’s my best seller at craft shows so I can’t rightfully kill the cash cow. My vision was always to make jewelry that expressed my love for animals and art. I’ve been wanting to move in this direction for years but couldn’t get past my own judgements long enough to actually finish a single thing. (Okay, that’s not true, I’ve finished one drawing in the past 20 years and that is the Hazardous Materials skull graphic, which I love).

However, with the deadline approaching for the OC Local Mojo store, I knew I had to bite the bullet and either stay the rather unfulfilling course or tap into those talents that I gave up on so long ago. Last week, I purchased some Sharpie markers, grabbed a few sheets of printer paper and the dam immediately broke. No monkey mind. No peep of mental chatter to speak of. I just dove in and made up my mind to go with the flow by fully honoring my gifts. The drawings have been coming easily and effortlessly ever since and I can’t wait to incorporate them into my jewelry… 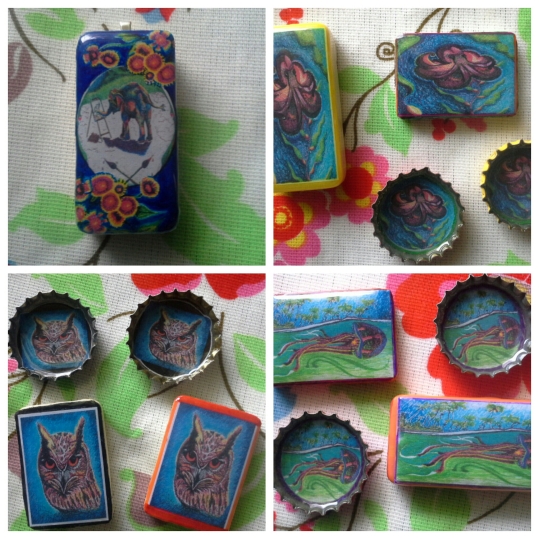 After having only completed one drawing in the past 20 years, I’d say these aren’t so bad. In fact, I really love them! Mistakes and all! And it’s absolutely strange because I was always a very precise technical drawer who specialized in extremely tight line-work and was never able to let loose despite my best efforts. Needless to say, I have no idea where this scribble style has come from. Perhaps it can best be explained by this TED talk. I can’t wait to see what some time away has done to my song writing!

I make it a point to check my spam folder on a semi-regular basis because I know even the good stuff occasionally ends up in that black hole of crap. Well during my scan-o-spam today I came across an email with “quilt” as the subject line. So either the spammers finally figured me out or someone was trying to connect with me on a deeper than viagra and porn kinda level. Low and behold, it was a nice email from one of my former Jo-Ann Fabrics students wanting to show me photos of her finished quilt! I can’t help but beam with pride. It was the first quilt she’d ever made and I was there to help her along the way. In the end, I would say she did an expert job! 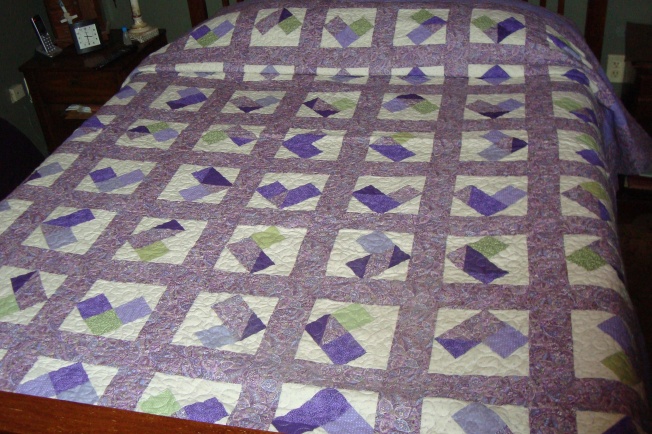 It’s moments like these that I miss teaching at Jo-Ann’s. I love meeting interesting people and helping them make things that they never dreamed they could.  It’s rather beautiful. More than anything, it’s surprisingly therapeutic. People of all ages seem to come in with overly inflated expectations of whatever they’re planning to make and are extremely hard on themselves when it doesn’t turn out “perfect.” Even if they’ve never sewn before, they expect their lines to be perfectly straight and the end result to be something that looks like it just came off the runway in Milan. My job was less teaching and more talking them down from their self-imposed ledge of perfection. It was certainly more than I’d bargained for but it was also the part I liked the most. Showing people how to creatively turn their mistakes into something even better, before they completely fall apart on you, takes a lot of skill. And when I say “completely fall apart” I mean it. My first student walked out of the classroom uncontrollably crying and I couldn’t find her for 20 minutes. And this was a 50 year-old woman, mind you. People will completely crumble as soon as they make even the tiniest mistake, this I’ve learned. When this happens, as a teacher, you take several deep breaths, stand back, and look at what they’ve done objectively. You learn to quickly improvise and problem-solve. You learn how to be convincing enough to get them to trust that you know exactly what you’re doing (even when you haven’t a clue). The best part is realizing that these mistakes are where their creativity truly lives. They’re no longer able to copy from the sample photo anymore. Their safety net is gone and they’re forced to give up control and finally do something different. I excitedly waited for these moments because therein lies the sweet spot– to keep going they have no choice but to abandon their expectations and, to make the best of a bad situation, they give themselves permission to dust off and wield their own creative license. In the end, every student liked what they’d done far more than whatever it was that they were originally copying from.  Ahh…we humans are certainly a strange and beautiful cast of characters. 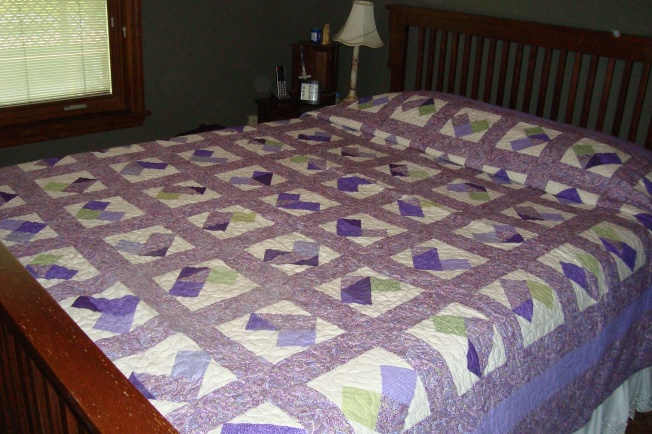